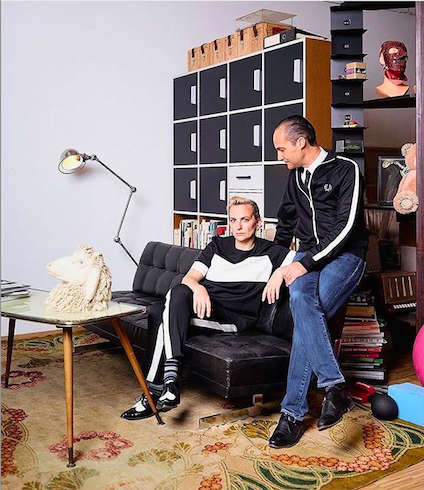 Austrian artist Deborah Sengl, who published her art book “The Last Days of Mankind” with DoppelHouse this past December, discusses her recent exhibit, “Broken Soldiers.” In the following interview with Alois Kölbl, she explores her views on power dynamics, war, and how she uses animal imagery to convey her humanist approach.

Alois Kölbl: “Power” is a theme that permeates your artistic work in various facets. What interests you about it?
Deborah Sengl: Power has long been a central theme of my art. I am interested in power relations, role-playing games, relationships between people, especially victim and perpetrator relationships. For over twenty years, I have been exploring what kind of passion burns between us, and that is mostly determined by power or powerlessness.

Your use of animals belongs to your unmistakable imagery. People in your paintings and sculptures almost always have animal heads. Why?
I started using animals very early on in my work. I also studied biology in parallel with my art studies. Animals have always fascinated me. I’ve used animals in my artwork, but always to depict human behavior. In this regard, I use what we attribute to humans instead to animals. These are, of course, purely human constructions, because the distinction between a “stupid goose” and a “smart fox” is objectively pure nonsense, because the goose is not stupider than the fox, but I play consciously with these metaphors and human attributions to show human behavior and misconduct.

The exhibition in the QL-Galerie features the series “Broken Soldiers.” What is this about?
In the series, I am concerned with the ultimately inner-human balancing act, that we are all victims and perpetrators at the same time. Wars have always existed, but at the moment wars are again spreading like a virus. I just had to confront the topic. My point is that people are involved in wars, but are also victims if they become perpetrators. The biographies of people who join terrorist organizations often show that they feel excluded from a society or a social sphere. I’m interested in exactly this inner disruption. 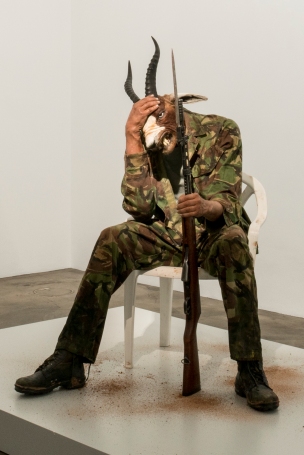 I am convinced that no one is born a bad person, as a soldier, as a terrorist, or even as a murderer.

Systems make people what they are. This is why my series “Broken Soldiers,” in which I also work with animal heads, also deals with mixed creatures such as the “lion zebra” or the “lion antelope.” I do not show what the depicted characters, who can be identified as soldiers by their weapons and uniforms, have done, but rather portray them as desperate. I show people who are struggling with what they’ve done. My concern is not to defend someone who has done evil, but to show that perpetrators are also victims – sometimes victims of themselves.

The “Broken Soldiers” are shown for the first time in the form of large-format tapestries. This is a technique you’ve never used before that is surprising in terms of your artistic approach and your themes. Tapestries are more associated with palaces or cozy, upper middle-class salons. What interests you about this technique?
It started rather by chance: The textile museum Augsburg approached me with the proposal to realize one of my works in textile. I found it appealing to translate just this theme, the stiff and military, which one would initially associate with hard materials, into textile – that is, in a soft material that also has something sensitive about it. It gives me the opportunity to broach the topic in materiality.

We live in a time of image overload. Images seem to have to be ever more spectacular and violent to be able to reach the viewer and to attract attention. How do you handle this as an artist?
As an artist, I am very interested in the role of the media. Media are also perpetrators. Perpetrators who produce feelings and manipulate them through image selection. That’s what I’m doing in my art.

How are your images created? Are there real role models, or are they purely artistic inventions?
Most of my images are usually very time-consuming and involve intensive research, mostly on the Internet. The series of soldier paintings is also based on real images. I only disguised them through the animal heads.

I suppose that dealing with these images is somewhat emotional for you as an artist, or can you just switch off after work?
Of course, there’s a certain routine in the image research. But it’s not like I easily escape the emotional horror. This was particularly strong when working on the series “The Last Days of Mankind.” At that time I also read a lot of war literature as part of the research. I actually had nightmares during this time, war images that did not let me go, and which always came up for me. They were deeply engraved. But it’s also good that it does something to you. I would like to see many more people face it.

The exhibition will also feature a homeless man with a dog’s head. How did the image idea come about?
The homeless man emerged as part of a diptych composed of a sculpture and a painted image showing a woman in a luxury bedroom. The idea came to me when a so-called Facebook friend posted a photo of a homeless person on Praterstern [that he found] on the Internet. On Facebook, he made fun of him, made himself superior in a way that I found shocking. I did not want to comment on Facebook, but decided to work with it, and of course I hope that this deliberately disturbing work will also affect the viewer.

How do you see the role of art in terms of its sociopolitical relevance?
My own art is very direct and thematically related to social processes and developments, very political, and it also becomes more and more political. Basically, I believe that everyone should make the art that suits him/her. I think abstract art is as valid as the art I make. Art cannot and must not proselytize and certainly not serve as therapy, but art can be something of an outlet. My own, for example, primarily as an artist who has become increasingly unhappy with the conditions in this country and worldwide. For me, it’s a way to deal with things that bother and distract me. Of course, I would also like to hold a mirror to the world, and not just for art-savvy people.

Will you succeed? Do you get feedback from people who don’t have affinities to the art and gallery world?
With my works I try to give viewers a very fast and direct entry. Of course, I hear from people in the art scene now and then that my art is too bold. This is a very conscious approach for me. I like to compare this with the story of “Alice in Wonderland,” in which the protagonist stumbles into a different world at first. But then she stands in front of other smaller and smaller doors, where she has to shrink herself by magic until she can enter them. I also hope my art functions in this way: After a quick entry you are facing more doors. Whether you want to open them is your own decision. You really have to want it.

My large [installation] “The Last Days of Mankind” was shown in very different places, not just in the context of art. It was a great experience for me that people from completely different social strata approached me and thanked me because they gained a new perspective. I’m happy about that as an artist. Especially since, of course, with regard to my own work, I also know that it is not always successful and not at all self-evident. Of course, what also plays a role in the reception of my works is that I do not relate to niche topics, but instead pick up problems that affect many people directly or indirectly, when it comes to war or even poverty.

I cannot solve any problems with my art, of course. I can only make small artistic offerings and hope that people then see things differently in real life outside the art world.

This interview with Alois Kölbl was originally published in Denken und Glauben, the magazine of the Katholische Hochschulgemeinde Graz.

iThere are no comments