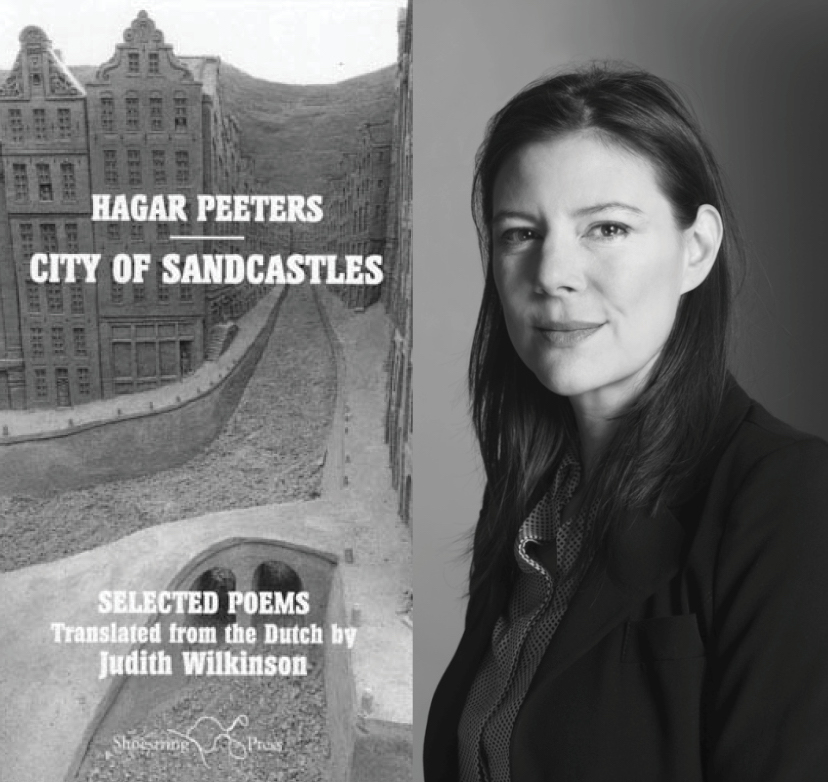 Used with permission of Judith Wilkinson and Shoestring Press

— do you see that Arabian steed
that horse of iron wire that
bellowing Guernica?
That’s me.

By the time the sand
that flies up from under my feet
and blinds you
as I pass
drifts down before your eyes,
I’ll be gone.

The dromedary unfolds itself
vertebra by vertebra
rises in jolts to its feet and undulates
clunkily from sight.

A black sun
rises above my eye.
This blurred lens seems to ensure
that everything’s a mirage.

Stiffly nothing stretches
fully yet but lingers before the furthest
point is reached a beat or two behind
until the caravan of limbs
is ready to accept the journey.

What is heard has been banished from the ear
roams the furthest passageways of the vault
and flows out in echoes of memory.

There it soars like a bird, too high
to hear the beating of the wings
and yet a whirling sound
and the protesting wind
still strike a chord, somewhere.

Then the sense of touch grows numb
as if the living had become the dead,
even this child I caress
and place beside a stump
that casts no hint of shadow.

As far as the eye stretches —
a child, a cry and nothing but this wilderness.

The house of the exile
is a house with doors
that open and close in both directions
so that arrival and departure
take place in a single flowing movement
as with a revolving door
in the centre of which the exile
waits to be shut in.

The house is not a dwelling place
but a place of anticipation.
All the rooms are waiting rooms.

The sofa in the sitting room
offers only a brief respite
from pacing up and down.

As final as the orders are
so indefinite are the days.

The windows are windows
through which a landscape can be traced
that will soon no longer be visible
and in which the vista
of origin betrays itself.

When the exile leaves his house
he follows the signs that say ‘exit’,
which he’ll encounter wherever he arrives.

All that multiplicity of future conflict
surfeit of discord and division
being sown like the grain on earth
with deportees and exiles as the offshoots
all those on the run for their convictions
those placed behind windows against their will
those stolen, traded or driven away
germinating as that same grain
as countless as the stars
nameless in number
and without name.

Like the man who knows
he’s losing.
It started with one humiliating experience
whereupon matters went downhill.

Numerous times he married unhappily.
His children failed in the possibilities
that hadn’t been offered to him.

He looks at his hands.
Somewhere they have missed their hold.
He tries to remember when that was

or perhaps he is counting his fingers
without anyone noticing.

The exile uses many means of transport
to dispatch himself:

his own two feet, on sandals made of car tyres,
the iron horse, the golden coach,
the silver rainbow bird, the bronze steam locomotive —
outdated, verdigris-coated —
hidden in the landscape.

The camouflage of the exile
is his passport, with inside a photo
that almost equals him.

RULES OF THE GAME

When one exile runs into another
they play poker, but not for money.

The winner is given a
prophecy as reward.

Because it’s only a game
the loser gets new chances.

MEMENTO OF THE FOLKINGESTRAAT IN GRONINGEN

Here our eyes study the house fronts
with their still quite recent
commemorative art, and we practise
not seeing anymore, not ever being able
to look at it all anymore, and when we shop
at one of the fifty-seven retailers
in this narrow street, tucked into the city
like a hiding-place, a secret cranny,

we relive the never shopping anymore
at the baker’s at the kosher horse butcher’s,
we relive the never trading
here in this street of trade, this gateway
to the city and place of pilgrimage
where the synagogue has opened its doors again
and dwellings built of durable stone
in their simple presence
eternalise the fact that life here is a reliving
of the impermanence of life

that was cut short in this street that never stops
and in one of the numerous cafés,
here, where we are merry, we relive
the end of that merriness
for those who were deported in this street.

Translations included in the collection City of Sandcastles, or earlier versions of these translations, have appeared in the following journals and in an anthology: Acumen, De Hofjeskrant, Dutch, Loch Raven Review, The Manhattan Review, Poetry Salzburg Review and the anthology What’s Poetry?

City of Sandcastles (Shoestring Press UK) is available for purchase from the European Literature Network.

Hagar Peeters (b. 1972), nominee for Dutch Poet Laureate in 2008, has won numerous prizes and published several volumes of poetry: Enough Poems Written About Love Today (1999), Suitcases of Sea Air (2003), Runner of Light (2008), Maturity (2011), City of Sandcastles (2018), and The Author Is a Single Mother (2019), published in the Netherlands and in Chile, the first part of a trilogy in which she examines the relationship between authorship and single motherhood. Its sequel consists of prose exercises and philosophical consideration, for which she was awarded a scholarship by the Dutch Foundation for Literature and a writer-in-residency at NIAS (The Netherlands Institute for Advanced Study in the Humanities and Social Sciences) by the Royal Netherlands Academy of Arts and Sciences. You can watch her read selections of these and other poems at the 2021 NIAS inaugural event. Peeters broke through in 1997 as a rap poet and then graduated cum laude in the History of Culture, Mentality and Ideas after the Enlightenment. Her poems have been sung by prominent Dutch artists. She lives in Amsterdam with her son.

Peeters’s award-winning novel Malva (DoppelHouse, 2018) poetically explores the interior life of Pablo Neruda’s forgotten daughter along with Neruda’s politics and the state of Chile of the time. Peeters spent ten years researching the life of Malva in the Netherlands and Chile. The novel has now been translated into six languages.

Judith Wilkinson is a British poet and translator. She has won many awards, including the Popescu Prize for European Poetry in Translation in 2011 and the Brockway Prize in 2013. In 2011 her work as a whole was nominated for a London Poetry Award. She lives in Groningen, the Netherlands.

“I hope Wilkinson’s work as translator and herald leads to an American
edition of City of Sandcastles and the recognition of Peeters as a major
world poet whose work regularly finds a global audience.”
—Rick Larios, The Manhattan Review

iThere are no comments