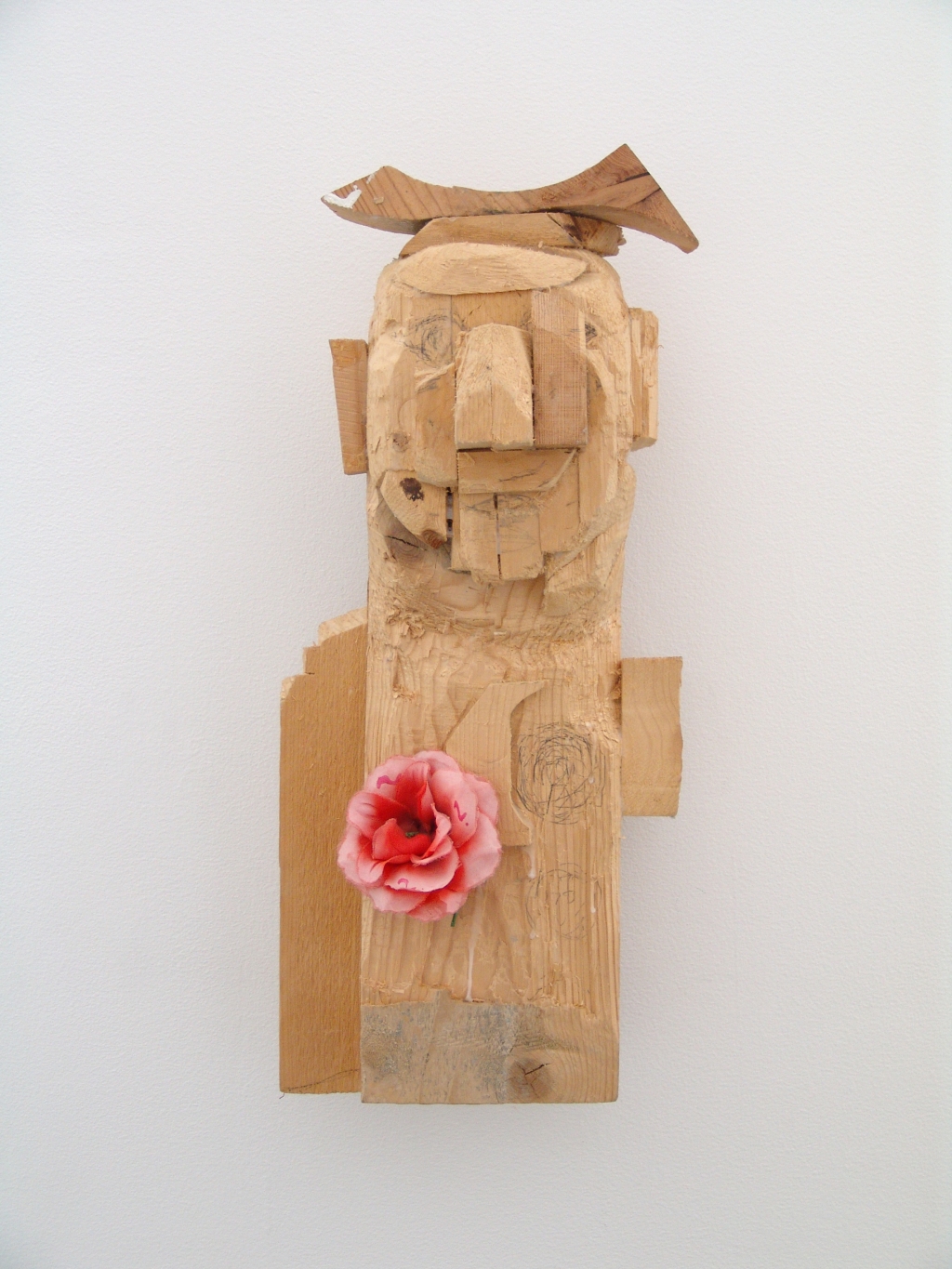 Róza El-Hassan’s stance on activism and propaganda in support of Syrian refugees is steeped in her paternal ancestry. Born in Budapest, but holding dual citizenship of Hungary and Syria, El-Hassan’s self described focus on “social design” that characterizes her practice comes from working with refugees in Syria, Lebanon, and Palestine. In her first solo exhibition at the Thomas Erben Gallery, New York in the fall of 2014, a series of drawings and sculptures represent “the necessity to return to something that is perceived as natural, human, and simple.”[1] Inspired by the Syrian form of small adobe houses from the architecture of northern Syrian villages—the cub, or “dome” in English—El-Hassan’s art is geared towards her larger question: “Can art and aesthetics be tools of agitation, … even propaganda for peace?”[2]

The architectural components of the artist’s work can be deduced from a series of conceptual drawings titled “Breeze 7, Groundplans for Shelter” (2014, left and right). 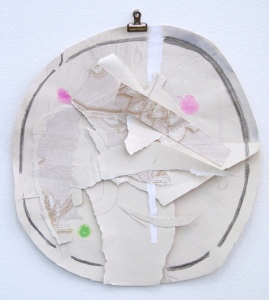 Made on the reverse side of decorative wallpaper acquired as a gift from an Indian shop owner in Qatar, these highly esoteric collages of ripped wallpaper, thin pencil outlines and shaded areas, glued white drawing paper, and the occasional fabric are reminiscent of apocalyptic landscapes, and harrowing experiences of war torn homes. Strangely evocative of the German artist Kurt Schwitters—whose well-known Merzbau collages, made from trash collected around Germany during WWI, recreated the fragile beauty of German culture—El-Hassan’s “Breeze” series attempts to give form to the architectural traditions of the disenfranchised Syrian community. 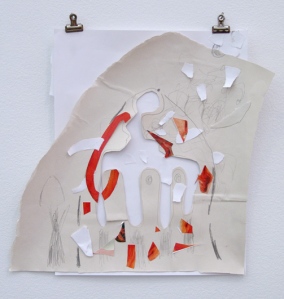 Large excavation areas shown in some of the spatial views of the domes suggest both coveted zones of home and safety, as well as the emptiness of despair. By eliciting a sequence of conflicting emotions from her drawings, El-Hassan enables the viewer to navigate through her highly personalized and complex imagery. For example, while the title “Breeze” connotes a light gust one feels on the rooftop of a house in the evenings, El-Hassan’s spare, contorted lines accompanied by large empty tracts hardly evoke a refreshing sensation.

Similarly, in another work, bright red pieces of paper that could be interpreted as joyful or alarming, surround a peculiar four-legged upright creature, which has been cut out in the wallpaper. One wonders if the creature is trapped, or if it is a happy occupant in one such adobe house. And what may at first appear to be makeshift has in fact strong underpinnings of formal thought. Although the clips used to hang the drawings of the shelters amplify the makeshift quality of the works and convey a sense of impermanence, the beauty and delicacy of the intricate wallpaper that appears in swaths on almost all the drawings becomes symbolic of home and permanence. El-Hassan repeatedly calls attention to the Syrian condition through this constant tension in her drawings between a longing for stability and the precariousness of living conditions as a refugee. 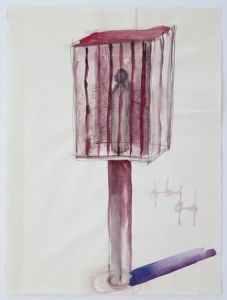 — In the “Suomenlinna” series (1999, example left), framed drawings that resemble ideas taken from a diary or a notebook encapsulate an important moment in El-Hassan’s life. Time becomes central to the interpretation of these works that include the use of watercolor, pencil, and black inked pen. Made during a residency at the Suomenlinna castle in Finland that was built in 1748 to ward off Russian expansionism, El-Hassan was haunted at the time by the terrible war in the former Yugoslavia and the horrors of ethnic cleansing in Bosnia and Kosovo. Feelings of incarceration and entrapment sear through the watercolor paintings of rectangular cells that feature isolated figures. Here, the artist’s spare, hasty sketches draw one’s attention to the lonely life within a penitentiary. In these drawings, the notions of refuge and sanctuary are repeatedly thwarted and denied.

El-Hassan’s water colored text FREEDOM FOR ALL DETAINED (right), in the “Suomenlinna” series is reminiscent of protest art that addressed serious societal issues through popular forms such as text-based graphics. The sign “Neutrality,” a message written in German, and a man holding a flag depicted in a few other drawings are pointedly made to create inclusive art which inspires dialogue, collaboration, and community activism. El-Hassan’s work also encompasses broader issues of “Women’s freedom, the right to have a family as an intellectual woman, the freedom to travel and to see the world, [and] freedom to practice religions.” 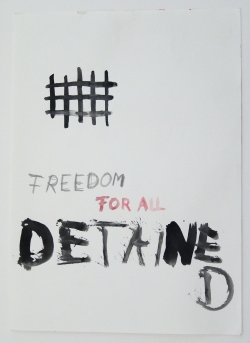 These works of protest art are precursors to the “Breeze” series that she describes as more “emotional, expressive blueprints, which look like a collage.” Never too far from allusions to the lack of home and security, the drawings reflect El-Hassan’s observations of restrictions placed on the Syrian community. Hung asymmetrically, at various heights on adjacent walls in the gallery, the drawings restrict the movements of the public, who must consider the value of freedom for those who are denied this basic right.

Architectural construction, assemblage, and symmetry play a vital role in El-Hassan’s sculpture. Deeply inspired by unnamed Syrian artists whose work she describes in an essay as avant-garde for its spontaneous expressiveness that is untainted by the prisms of art history, El-Hassan’s own art comes close to capturing the ethos and pathos of these displaced people. Her coarsely assembled hand sawn sculptures attached by wooden pegs speak to mankind’s atavistic origins. Embedded in the aptly named carving Enigma (2013), consisting of a large block that resembles a body, an oversized heart, and the semblance of a bloated face, are expressions of pain and stoicism.

El-Hassan enables the most powerful emotions to emanate from the most rudimentary forms. Contrary sensations of crudity and calm, and of brutality and peace are evoked by the contrast between the rough exterior and the nuanced sentiments of these configurations. The underlying symmetry and balance of her work, regardless of whether it is the seated happy Red Man (2006), constructed from wood, fabric and mixed media, or Two Buddhists Visiting Hagar (2004), contribute to its visual and emotional import. Yet the heft and beauty of her art results from the constant play between symmetry and asymmetry, primitive and refined, local and universal aspects. In Freedom Statue (2014), a grooved rectangular block with a hollow central space, fitted with a wooden piece shaped like a head, conjures strong associations of a faceless and discarded human being. Ultimately, the impact of El-Hassan’s unassuming activist objects remain in one’s mind precisely for her ability to communicate a pressing situation through elemental means. 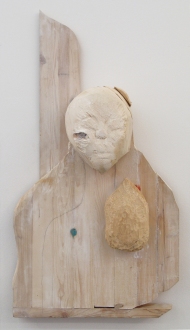 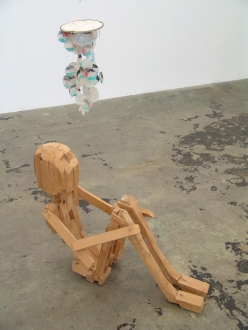 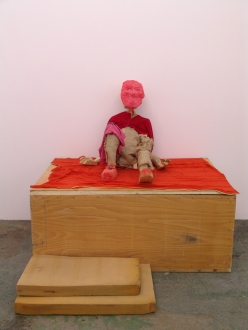 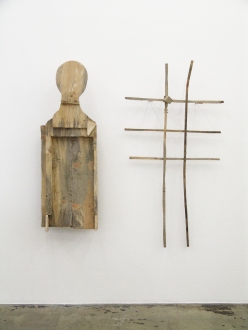