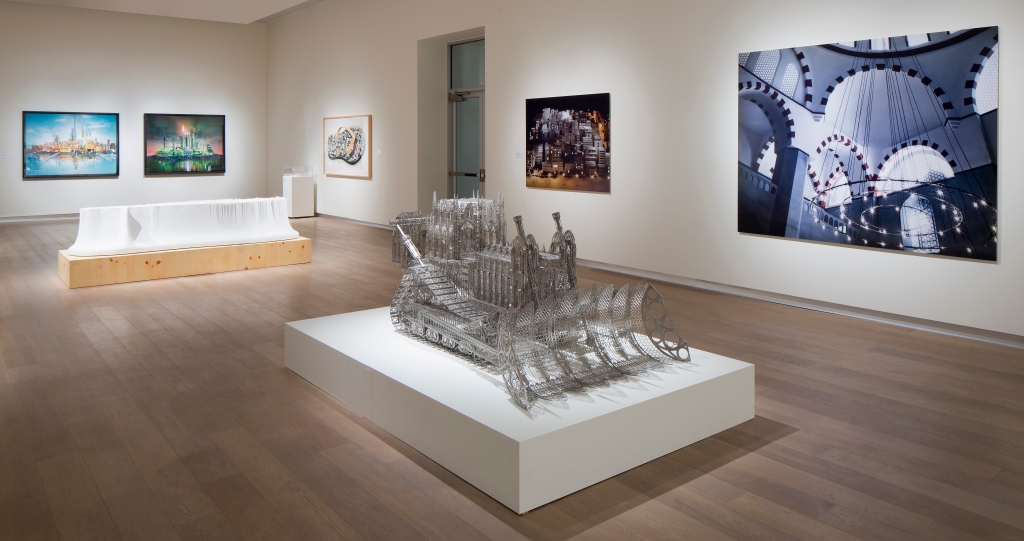 Built, World, an exhibition composed of sculptural works by a group of internationally recognized artists at the SCAD Museum of Art, investigates architecture and structural forms as articulations of injustice, oppression and longing. The exhibition, co-curated by Aaron Levi Garvey and Storm Janse van Rensburg, gives grist for viewers to examine how divergent practices from many different circumstances and global locations might be viewed and grouped together.

The first grouping of works by Zarina, Carlos Garaicoa, Louise Bourgeois, Susan Hefuna, Olafur Eliasson, and Bernd and Hilla Becher establishes the curators’ approach to showcasing contrasting ideologies and styles. The Bechers’ objective clinical approach, emblematized by their classic black and white photographs of houses in Germany from the 1980s, is similar to Eliasson’s Your House, 2006, a methodical structural rendering of a cross section of a home cut through myriad sheets of paper. Even Hefuna’s spare bronze sculpture Grid Drawing, 2014 that resembles the lines from her well known translucent works on paper, which are inspired by Manhattan’s geometric form, fit with the Becher’s stark, streamlined aesthetic. These works are contrasted with the charged notion of home and nation as evinced by Indian artist Zarina’s collage abstraction, Some Houses Don’t Fall, 2015, made with pewter and gold leaf that convey her longing for home in pre-partitioned India. Similarly, in Garaicoa’s Terrasse St. Denis, 2011, a black photogravure outline of a building with a pop up structure of a stylized facade, presents his idealistic vision for preserving crumbling architecture in his native Cuba.

For artists like Garaicoa the organic use of architectural structures is endemically linked to their political agendas. His buildings recall a long history of oppression and neglect in Cuba. Although Bourgeois’ 1946 home drawing included in the same grouping is not representative of her highly potent femme maison drawings of female domestic entrapment made at the same time, the geometric structures of her images engage at a fundamental level with Kiluanji Kia Henda’s photographs and Talwst Santiago’s miniature dioramas that are displayed in the same room. Henda’s grouping of eight photographs that comprise Rusty Mirage, 2013, document a live performance in which individuals arrange metal outlines of buildings in an arid landscape to mark a new imaginative skyline in independent, war free Angola where he was born. For these artists, freedom from oppression—be it Bourgeois’ need for relief from being at home, or the effects of colonization—is expressed through their constructed worlds.

The notion of identity also becomes indelibly linked to the artists’ choices of materials and forms. Hence the Trinidadian-Canadian artist Santiago’s reconstructed realities of black lives become highly potent symbols of racism and the ongoing issue of violence against black men. In Execution of Unarmed Black Men, 2014, he alludes to the recent killings in Ferguson. His miniature diorama of the scene in a ring box with the backdrop of an old run down brick building that appears in the lid of the box conjures a dilapidated neighborhood, and inversely magnifies the atrocities committed against its denizens.

The significance of architecture as a discipline is at its best in the exhibition when viewers are able to draw a connection between Becher’s scientific precision and Wim Delvoye’s large, impressive replication of a gothic German church. This structure titled D11, Scale Model 2.0, 2008 is made from laser-cut stainless steel fitted on to the structure of a caterpillar construction machine. Delvoye uses architecture’s framework to enable his combinations of classical formats with industrial objects. Similarly, Yutaka Sone’s exquisitely scaled miniature carving of Little Manhattan, 2007–2009, carved from a block of marble and sitting on a wood plinth, is reminiscent of Panorama—the large-scale model of New York City that was commissioned for the World Fair by Robert Moses in 1964. He too utilizes the exactitude of architecture to make an object of beauty.

Built, World also juxtaposes contrasting representations of reconstructed architecture and loss. While James Casebere’s photograph Mosque (after Sinan) # 3, 2007, depicts his handmade model of a mosque inspired by 16th century Ottoman architecture, David LaChapelle’s photograph shows his ingenious kitschy production of Emerald City, 2013, made from household objects such as beer cans, bottles, curlers, and plastic tools. One might infer the notion of loss for a glorious past from these images shown alongside the color lithograph Coco Solo, 2004, of the city of Havana drawn on a sandal by the duo Cuban collective Los Carpinteros. Yet loss appears in a more elegiac form in Bobby Davidson’s US Letter series, 2012. Faint appearances of a streetlight, park bench, phone booth, and escalator through the hazy peach colored atmosphere of Davidson’s paintings evoke images from the devastation of 9/11. Here it appears that the magnitude of loss from Davidson’s representations of architectural objects, or even the sense of deprivation in Santiago’s reconstruction of reality is sharply contrasted with Casebere and LaChapelle’s use of architecture to create stylized urban structures of a bygone world, and an industrial wasteland.

The impact of loss and memories of oppression as well as displacement reverberate through some of the strongest works in the exhibition. Three pieces displayed in a narrow adjoining space are perhaps the best grouping in the show. Angela Ferreira’s installation, For Mozambique (model No. 3), 2007, was made in honor of Mozambique’s independence from Portugal and is influenced by Russian constructivist architecture that pointed towards a utopian future. Ferreira’s celebration of her country’s release from years of colonial oppression through music and speeches projected on a screen in the installation is in consonance with the concept of Ramon Miranda Beltran’s work. Beltran’s concrete slabs printed with text and newspaper images of police brutality in his native Puerto Rico mimics the dissenting power of graffiti on concrete, and works towards a better future by exposing the inequities in his country. His technique of superimposing appropriated text and images on industrial square surfaces echoes the Syrian-Armenian artist Hrair Sarkissian’s method in his massive rectangular banner City Fabric, 2010, which is made up of multiple layers of images that reflect the empty ghost towns of Armenia and its suppressed past.

Ultimately, the divergent themes and moods of the works in the exhibition raise some important concerns. While the show is an important selection of diverse artists, one can’t help but notice the dissonance between some of the works. Many of the objects, closely spaced in the gallery and using disparate architectural forms, detract from rather than complement each other. By attempting to blur the distinction between artists with a flair for implementing architectural acuity, and those whose architectural forms emanate from a need to express identity, the show is weakened by not doing adequate justice to either.